I actually threw this Brilliantly Frugal Baby Shower for my best friend 4 years ago. However, I still get asked regularly how I managed to do this for only $100 while I was underemployed. I had a blast making this baby shower happen with and for my friends and definitely had lots of help.

It’s completely okay to ask for help with paying, providing items, or taking ownership of takes. I spent about $100 on decorations, plates, utensils, cups, party favors, snacks, and games. I asked her sister to take care of the cake. Another friend purchased all of the food for the pizzas as a gift. Our friend’s mom volunteered to make the pizzas. A ton of friends helped put together the decorations; including putting together bee balloons, decoration bubble party favors, yellow sunflower arrangements, and fluffing yellow puffballs. They also helped with putting up the decorations before the baby shower began. It was a lot of work with many hours spend DIYing decorations and putting them up. However, all of our friends were willing and asking to help.

If you have someone asking to help with the baby shower, absolutely take them up on it. Have them cut things out, puff out decorations, something. If they’re asking, it’s because they want something to do. Don’t brush them off or say you have it under control. Put them to work! Even if it’s a small task. You’d be surprised how much your friends want to help and quickly things will get done.

Most of the decorations were from Dollar Tree – streamers, balloons, plates, napkins, forks, short dowel rods for things we crafted, sharpies, bubbles, you name it. Dollar Tree had everything in our colors and we were able to craft the decorations together.

We had paper lanterns in the garage that we got from a garage sale and never put up. We spray-painted them yellow and then glued little bees to the paper lanterns. The bees were from Dollar Tree in the flower arrangement and craft section.

We put honey nut cheerios and honeycomb cereal in large clear jars as snacks for the kids that they could grab and eat. It was extremely cost-effective, gave the kids an easy way to get a snack if they got hungry, looked really cute, and was perfectly on theme.

You can find printables of a lot of cute decorations that you can print in color and cut and glue for what you need. We printed this cute little banner on card stock paper that we had already and hot glued it to twine we got from Dollar Tree. We got so many compliments and people kept asking where we bought everything. I was super proud to tell them that most of it was DIYed!

You can find links to most of the printable pages on our Pinterest Board here.

We borrowed a large backyard from a friend’s mom. She was gracious enough to let us host there and cooked pizzas for everyone in her pizza oven. She was also a beekeeper and let us give away a couple of jars of her homegrown honey as prizes for the games. Even if you don’t have a swimming pool or pizza oven outside at a friend’s house, the greenery of a backyard automatically adds to the decor. It also keeps people from feeling like they’re “cooped up” in a house. Everyone can spread out a bit better and the kids can run around more freely to get out their energy from all of the cake and snacks.

The baby shower included males, females, singles, couples, and kids. We tried to keep that in mind and have something for everyone so that everyone could have fun and participate and keep anyone from being bored. I found games online that would be really fun for everyone. Even better, we didn’t have to buy very much for them!

We bought cheap diapers from Dollar Tree and used small balloons to race to see who can put the diaper on the fastest. We also bought cheap bottles from dollar tree, filled them with beer, made the opening slightly bigger at the top, and gave a prize to the person that could chug beer out of the bottle the fastest. For our last game, the guys put a balloon in their shirts (we recycled the balloons left from the diaper race game) and saw who could run to the other end of the yard, gran their shoes, run back, sit down, and put them back on the fastest. All of our friends had a blast participating and watching everyone else play.

We also got coloring books, crayons, and bubbles for the kids in large batches from dollar tree. The backyard we borrowed also had a pool, so no matter what, the kids were all entertained either swimming, coloring, or blowing bubbles. They were all tuckered out at the end.

Here’s a quick peak at what it looked like all together:

For other decorating on a budget tips check out this post here. 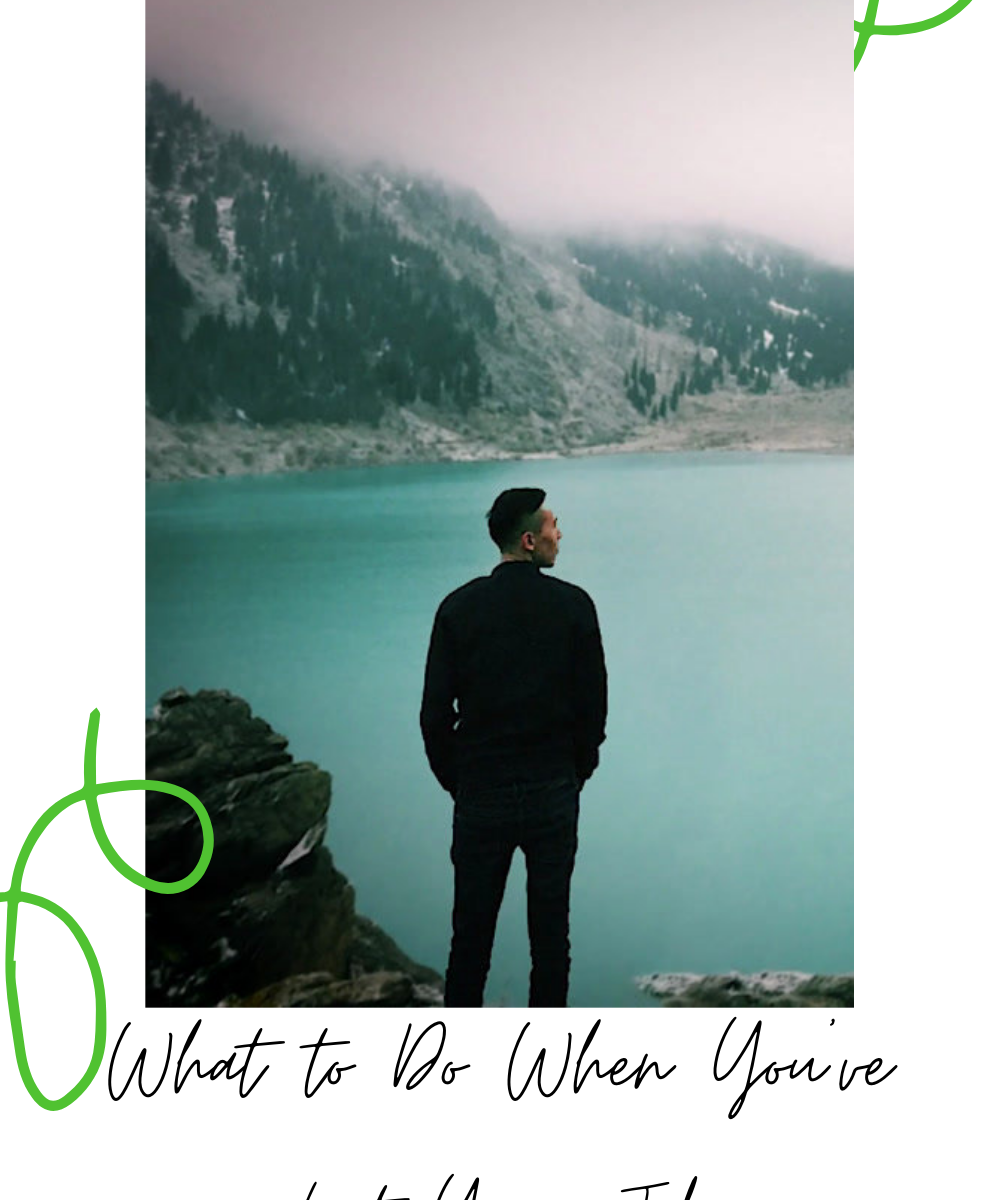 What to do when you’ve lost your job. That is the sentence I googled when I got laid off. It sucked. It didn’t feel good for me or even for my supervisor that had to tell me. They told me that they didn’t agree with the decision, I was a great employee, and it was only because of the cost of my salary that I was being let go. They were right. I was a good employee. I worked very hard for the company for 5 years and it felt like a rejection or discreditation of the care and work I’d done over the years.

I’ve also had family members that have lost their jobs. It can cause immeasurable and unique anxiety, uncertainty, and a variety of other feelings. This is especially true if you have been living paycheck to paycheck and don’t have an emergency fund, money cushion, other methods of income or support system to rely on.

What to Do When You’ve Lost Your Job Tip #1

Breathe. Take a day or two if you can and decompress. Let yourself feel whatever your emotions are about it. It’s important that you take good care of yourself in whatever ways you can, whether they are big or small. That could mean doing an at-home spa day with all of your leftover, sample, or gifting bath products that you hardly use. This could also be taking a day trip to a place you’ve always wanted to go, even if only to take some pictures and take a walk around. It could also mean just vegging out on the couch for a day watching crappy TV and eating frozen pizza and ice cream.

What to Do When You’ve Lost Your Job Tip #2

File for unemployment. If you’re not sure if you’re eligible, most unemployment offices have a questionnaire or will tell you during the application process. Many offices are overloaded so if you don’t get through, try try try again until you do. Triple check all the paperwork to make sure it was filed and done correctly by you and also the workers at the office. Again, they’re overloaded and mistakes are possible. Keep copies or screenshots of everything you send in to the office or communication you get from the office. Paperwork can and sometimes does go missing. If you have that paperwork quickly available, you can get mistakes or kinks worked out much more quickly.

What to Do When You’ve Lost Your Job Tip #3

Check to see if you qualify for other government programs. Depending on the local eligibility requirements and your situation, you may also be able to apply for your local food or children support programs in your area or state. Every little bit counts, especially when you’re not sure how long you will be out of work.

What to Do When You’ve Lost Your Job Tip #4

If you have student loans, if you can still make your payments on employment, do. If you can’t, switch to an income-driven repayment plan or delay (forbear) your payments until you’re working again. Income-driven plans and forbearance will likely cost your more interest in the loan run but will keep you from going into default or delinquency while you’re unemployed. Call or email your servicer right away to discuss what options are available. You may be surprised at how willing they are to help.

What to Do When You’ve Lost Your Job Tip #5

Assess your living situation. Do you need to move in with family or friends? Can you rent out a spare bedroom in your house or get a roommate in your apartment? You may have other friends or family that are needing to downsize or find other housing right now. You may be able to help each other out by consolidating your households.

Even if you don’t think you’ll need to make changes like that immediately, spend some time looking at your living situation and answering those questions of what you can and are willing to change. Make that contingency plan so that if you do need to make a change in the future, you know exactly how, when, where, and what you will be shifting to make that happen quickly.

What to Do When You’ve Lost Your Job Tip #6

Take an inventory of your finances and figure out what you can reduce. Unemployment is often less than what you made when you were working, so you’ll need to do some reducing and cutting down. Check our guide for doing that here.

What to Do When You’ve Lost Your Job Tip #7

Think about switching jobs or fields. Grocery stores, warehouses, and the veterinary and medical fields are all always hiring. Maybe think about if you should go back to school or certification program for any of those.

What skills do you have? Do those translate to something you can sell online? Many of my friends started doing online personal training and fitness classes online, leaned into their creative energies and Etsy shops for extra money, or turned another skill into something that they can sell. The great part about this is that you are now running your own business, Your schedule, ideas, passions, and wants are all yours to implement and grow while being able to pay your bills.

What to Do When You’ve Lost Your Job Tip #8

Take time to explore and nourish your hobbies. They don’t have to be a side hustle necessarily. You need to decompress. This is highly stressful. But if you do end up making some money, great.

What to Do When You’ve Lost Your Job Tip #9

Start reaching out to your network. Don’t feel weird or ashamed if you haven’t spoken to that person in years. Reach out and ask if they would like to get coffee. Even if they don’t know of any job prospects, it can be surprisingly helpful to connect with old friends and catch up when you’re going through a difficult time.

What to Do When You’ve Lost Your Job Tip #10

Cook at home. I know. This one can be annoying to hear and we discussed it a bit in our article for getting healthy and saving money here, but it’s worth saying again. It can be one of the biggest money savers in your budget.

Make big meals and freeze the leftovers for when you don’t feel like cooking. This doesn’t necessarily mean that you have to “meal prep” and spend a whole day cooking. I personally do not enjoy or subscribe to meal prepping. It does mean that when you are cooking, instead of making enough for 1 or 2 people, make twice what you normally would. Use storage containers and Tupperware to portion out individual meals to freeze or to eat for the next few dinners. You can cook 1-3 times a week and still stick to your goal of eating at home more and saving money by eating out less.